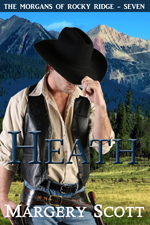 Heath (The Morgans of Rocky Ridge)

Heath Morgan is a happy man. He has his ranch in Rocky Ridge, Colorado, his close-knit family, and his freedom. He doesnâ€™t need anything else. He has no intention of following his brothersâ€™ footsteps and getting â€œstuckâ€ with one woman when there are so many out there to enjoy.

Annabelle Forresterâ€™s life in a small mining community is anything but exciting. The only bright spot in her existence is when Heath comes to visit friends there every few months. She has loved him since the first time they met and even though she knows he has no plans to settle down, she hopes heâ€™ll eventually love her back.

Then, one night, everything changes and by the next morning, Heath is gone.

When Annabelle tracks Heath down and gives him some unwelcome news, neither of them can imagine how it will change the course of their lives.