Remember coloring books and paper dolls? As a kid I adored both. I loved using my imagination to change the pictures and add to them. I traced them on plain paper so I could color them over and over again. I did the same thing with paper dolls, designing more clothes for them.

I have always told stories. I created stories for the coloring book characters and dolls. My favorites were fairytales, Cinderella, Snow White, and others with that Happily Ever After. The other girls liked the stories I made up for â€œWhat happened next.â€

When my daughter was young, I used the same techniques to make the fairytales last. We added chapters to the old stories. 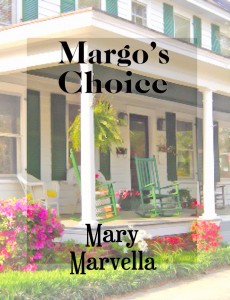 Today I still tell stories, but I use a different approach. I find my own â€œwhat if?â€ to get a story growing from a kernel of an idea. Margoâ€™s Choice began with a first line contest. I needed a grabber, soooooo.

â€œMaybe I should become a lesbian for a week. â€œ I donâ€™t know who sent that thought, but it made me wonder who would think that and why. Are you wondering?

Margoâ€™s Choice is a Southern Womenâ€™s Fiction story.
Margo Lake isnâ€™t looking forward to seeing her ex husband Jay again. After 16 years of separation the marine still knows how to push her buttons. She has never stopped loving him, at least in some ways, though she really doesn’t like him.

When she learns he isnâ€™t coming for a visit but is retiring, she fears what he can do to her heart if she lets him inside for even a second. Even more, she fears for the heart of her youngest daughter, the child who adores him, the child he doesnâ€™t believe is his.

â€œMaybe I should become a lesbian for a week,â€ I blurted.

Carol choked on what was left of her watered-down frozen strawberry daiquiri.

I intended to pat her back, but she had become a blur â€“ three too many daiquiris for me. Even the beige walls of my den seemed to move.

â€œWhere the hell did that come from?â€ Carol stared at me as if Iâ€™d grown two heads.

I gulped the rest of my drink and said, â€œDonâ€™t know what else to do.

Carol stared at me.

Excerpt:
Well, Hell. Iâ€™d planned to wait in the car. Some days Dee saw me as an okay mom. Others she didnâ€™t want to be seen with me. I popped the trunk and prepared to lug the spare and the jack out. My cell rang in my pocket. What now? I half rose, banging my head on the trunk lid. Stars filled my vision while pain made me feel faint, a tad nauseous.

â€œNeed any help?â€ A deep voice resonated near me, the masculine drawl familiar as my own. God, I really hit my head hard. That voice canâ€™t belong to Jay. Most of the men in this part of Georgia had the same charming drawl, so much more pleasing than some I heard every day. Other drawls didnâ€™t send shivers up my spin the way Jayâ€™s did.

I opened my eyes and saw long, muscular, denim-clad legs near the back fender. Heat spread over my face as my attention followed the legs to thick thighs, then the worn placket over the zipper. What a package, so far. I should straighten and look the man in his eye, but my stiff back had been bent too long.

A deep, masculine chuckle made me blush as I placed my hand on my back and tried to escape the position that made studying his lower body too easy. By the time I managed to straighten, the manâ€™s chuckle stopped.

â€œSonovabitch!â€ His expletive wasnâ€™t loud, but he hadnâ€™t whispered it.

Margo’s Choice is available now for Kindle at http://www.amazon.com/dp/B008M0U8CU

Where can you find Mary?
Http://www.MaryMarvella.com

Would you forgive a man who denied your child was his?

Comment for a chance to win a free copy of The Gift, the story of a 40 year old woman who lost her virginity on her birthday.

Thanks so much for visiting my blog today, Mary.