Visions of Sugarplums and Other Inspirations
GUEST BLOG – Nina Pierce

I love writing stories. Itâ€™s so much fun to tell people I write full time and watch their reaction. Nearly every person asks, â€œWhere did you find the inspiration for that novel?â€ And the answer I always give is everywhere and nowhere.

Everywhere there are the â€œwhat ifsâ€ around you. â€œWhat if a virus killed off nearly all of the human population?â€ (Healerâ€™s Garden http://amzn.com/B0035N1UO4 Elloraâ€™s Cave) â€œWhat if vampires had a secret society for policing rogue vampires?â€ (Shadows of Fire, http://www.amazon.com/dp/B0092AWIRM/ ) â€œWhat if someone was a wolf shifter and didnâ€™t know it?â€ (Bonded Souls http://amzn.com/B003VPWXM4 Elloraâ€™s Cave) Okaaaaaay, so maybe you donâ€™t ask yourself those questions, but thatâ€™s the kind of thing that rolls around in my head. Iâ€™m always imagining the â€œwhat ifâ€ of other dimensions or characters or places. From these odd ball thoughts the nugget of an idea forms and voila! A story is born!

Sometimes inspiration comes from a conversation overheard in the grocery store (itâ€™s a new talent Iâ€™ve developed to follow people and â€œoverhearâ€ dialogue between mother and daughter without looking like a stalker ïŠ).

â€œSeriously Mom, heâ€™s just, I donâ€™t know, the same age as Uncle Todd.â€
â€œWell, I wouldnâ€™t go that young.â€
â€œBut heâ€™s my law professor.â€
â€œAnd heâ€™s very single and he has a great butt I might add.â€
â€œEwww. Definitely TMI.â€ (A pause.) â€œYouâ€™re seriously going to do this?â€
â€œItâ€™s just drinks honey, not a marriage proposal.â€

Oh, yeah, that is definitely going to become a book some day. I just canâ€™t resist the idea of a younger man with an older woman. And the daughter already gave me all kinds of information about the fact that the man is the same age as one of her uncles and her professor. Oh, the conflicts abound with just that snippet!

Inspiration also comes from my adventures in traveling. I had the pleasure of visiting Sedona, Arizona and going on a jeep tour over and around the red rock formations. Between the remote location and the stories of extra-terrestrials shared by our guide, I couldnâ€™t stop my brain from running through all the possible romantic suspense scenarios. â€œWhat if they found a body?â€ â€œWhat if itâ€™s an alien?â€ Man, I just went all over the place with ideas that day. And yes, I still enjoyed the tour, but mostly because our guide was a handsome character in and of himself with a rich backstory of highschool loves, alcoholism and divorce. (Which I got him to share because Iâ€™m that curious about people.) Heâ€™s going to show up in a story some day.

Then there are the story ideas that spring to me from the newspaper headlines (usually the suspense part of my stories) or the songs on the radio (the romance plot).

But those nuggets only get me so far. Itâ€™s from the nowhere of my imagination the characters start forming and their troubles begin to surface and before I know it Iâ€™m on the journey of discovering another story. And it is a complete discovery for me. Iâ€™m what authors affectionately call a â€œpantserâ€, which means I have no outline. No idea (or very little) of where Iâ€™m going or whatâ€™s going to happen next. Itâ€™s all very organic. But thatâ€™s a post for another day.

The point is my inspiration is all around me. I canâ€™t always tell you exactly where a story started, but I can tell you I love the thrill of writing it.

I want to thank Margery for letting me take over his blog today. Itâ€™s been a lot of fun. 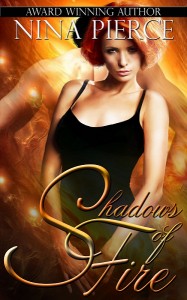 Ninaâ€™s most recent release, Shadows of Fire, is a sexy romantic suspense novel involving vampires working undercover as firefighters to bring down a murderer hell bent on revenge.

BLURB:
A woman forced to live a life she didnâ€™t choose â€¦
Thirty years ago, a horrendous attack in the California mountains thrust chemistry student, ALEXANDRA FLANAGAN, into the secret world of vampires. Now, unable to stomach the thought of drinking blood from another person, she survives on a chemical blood wine. But there are some who secretly disapprove of her clandestine activities and will do anything to stop her.

A vampire of honor protecting humans â€¦
Ancient vampire, REESE COLTON, is part of an elite military operation seeking out and eliminating rogue vampires. Undercover as a firefighter, he and his team have been called in to investigate the unusual number of fires covering up the murders of vampires living on Alexâ€™s blood wine.

A murderer seeking revenge â€¦
When chemistry ignites passion, Reese and Alex find themselves embroiled in an affair that catches them both unaware. With the number of fires escalating and evidence against Alex mounting, Reese isnâ€™t sure whether to follow his heart or the clues as he seeks to find a murderer in the Shadows of Fire.

EXCERPT:
â€œAlex, you down here?â€ called the voice again.

â€œIn the wine cellar,â€ she hollered back. Alex didnâ€™t need to consult the appointment calendar to know who was thumping down her stairs.

â€œGlenn called and asked me â€¦â€ Reese Colton strode around the corner, coming to a dead stop at the threshold. Time hung suspended. No one moved. Hostility instantly crowded the confined space, making it hard for Alex to catch her breath.

The vampire filling the doorway had done nothing more than spend time at her bar with the rest of the off-duty firefighters. Perhaps he was a bit more flirtatious, even shared a toe-curling kiss with her on several occasions, and though sheâ€™d wanted more, Reese had taken it no further. Despite all of that, the moment shared with Ronan brought a stab of guilt that just pissed her off. Alex didnâ€™t owe this vampire anything.

â€œReese. You know Ronan Nason?â€ she asked, pleased it sounded as cavalier as sheâ€™d intended.

â€œUm â€¦ yeah, we met a couple of months ago at the university.â€ Reese removed his sunglasses with such deliberate precision, Alex was sure they would slice the heavy tension in the air.

â€œReese was one of the firefighters who responded to that horrible fire in my chemistry lab,â€ she said, working to fill the uncomfortable silence. â€œThe one where my grad student was killed?â€ The young woman had only recently settled in South Kenton as a doctoral student of Alexâ€™s. The lab and all its contents had been burned so badly, the university wasnâ€™t sure the insurance would be enough to replace everything. Fortunately, the grant money from the tribunal would guarantee a complete refurbishment and extra funding for Alexâ€™s research. â€œAnd Iâ€™m sure the fire marshal did his job, but it bothers me that we donâ€™t know the whys of it all.â€

â€œThe death was ruled accidental.â€ Both men spoke at the same time.

Her gaze flew between them. â€œYes,â€ the word dragged slowly out of her mouth. â€œStill, itâ€™s hard for me to understand how a grad student in chemistry could have been so careless.â€

â€œNo doubt the poor woman let the Bunsen burner from one of her experiments get out of control,â€ Ronan said. â€œThank goodness no one else was caught in the blaze.â€ He looked to Reese for corroboration.

â€œAny life lost in a senseless fire is one too many.â€ Reeseâ€™s words were as hard as the look he shot Ronan. â€œItâ€™s a code to live by.â€

â€œAye, â€˜tis true for sure. Still, we have to be grateful it wasnâ€™t worse. Perhaps more safety education needs to be done. Iâ€™m all for keeping students safe.â€

â€œSo I hear.â€ The half smile Reese flashed held a challengeâ€”not humor.

Alex couldnâ€™t believe her ears. Ronanâ€™s reputation of hitting on underclassmen of both sexes was well known at the university. Apparently, his notoriety had also seeped into the town rumor mill and it was enough to raise Reeseâ€™s hackles. If Alex didnâ€™t do something soon, the testosterone flying through the air would likely wound them all. She cleared her throat to draw their attention back to her. â€œYes, well, okay then. Back to the task at hand.â€ Checking the scheduled appointments, Alex was surprised. Reese wasnâ€™t expected for another hour. â€œYouâ€™re early, Reese. If youâ€™re in a hurry, Iâ€™d be happy toâ€”â€

â€œNo, Iâ€™m good.â€ Casually leaning against the door jamb, Reese crossed his booted feet at the ankles, tucked his sunglasses into his chamois shirt and folded his arms over his chest. His contentious stare never left Ronanâ€™s annoyed expression. â€œIn light of all the recent fires, Glenn wasnâ€™t comfortable leaving you here on your own. When he called and asked me to give you a hand this morning, I told him I was happy to help with the appointments.â€

Alexâ€™s heart flipped in her chest. Sheâ€™d spent months trying to entice Reese beyond innocent flirtations and innuendoes. Now, when sheâ€™d made the decision to cut her ties with South Kenton, the man looked as if he were going to devour her in one lusty bite.

Award-winning romance author, Nina Pierce, grew up in a house full of readers. Nina’s discovered the passionate side of romance with her sexy stories. For her, it’s all about the sweet scent of seduction mixed with the heartwarming aroma of romance.

Nina resides in New England with her high school sweetheart and soul mate of twenty-eight years and several very spoiled cats who consider her “staff”. When sheâ€™s not writing she enjoys spending time with her three grown children, one love-sick son-in-law and a heart-melting grandson.