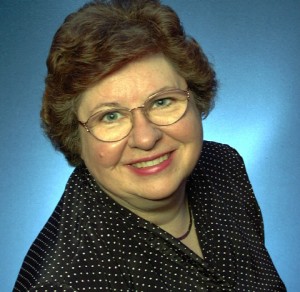 My guest today is science fiction romance author Diane Burton. Welcome, Diane. First, please tell us a little about yourself.

Iâ€™m a wife, mother, grandmother and writerâ€”in that order most of the time. Sometimes the writer takes over. My love of Star Wars, Star Trek and Firefly inspired me to write science fiction romance. My hero and heroine have grand adventures, take down bad guys, fall in love and do it all in space.

Sounds like fun. Can you tell us about your latest release?
The Pilot kicks off a sci-fi romance series about strong women on the frontier of space. There’s no place like home and he just stole hers. Cargo hauler, risk taker Celera d’Enfaden must work with rule-bound Administrator Trevarr Jovano to save her brother from a galactic gangster.

I assume that even though you like to write about outer space, you wouldn’t want to live there. So if you could live anywhere in the world, where would it be, and why?
I used to say Colorado because of the majesty of the mountains or on a lake for the tranquility. Now, I want to live close to my grandchildren, which may become a reality soon.

Do you have other talents? Or is there a talent you don’t have that you wish you did? Iâ€™m a pretty good seamstress. I used to make my own clothes and my childrenâ€™s clothesâ€”even make a leisure suit for Hubs (sort of tells you how long ago that was). I love to quilt but donâ€™t make time for it. I wish I could play the piano.

What do you like best about being a writer?
The ability to take nebulous ideas and turn them into real characters then watch how they struggle through trials and adventures to come out victorious. I love seeing adversaries figure out that if they team up and work together theyâ€™re stronger. And, of course, I like watching them fall in love.

When did you start writing? What inspired you?
My first writing was in high school when my girlfriend and I wrote whatâ€™s now called Fan Fiction (we just didnâ€™t know it then). We would take our favorite TV shows and write episodes in which we starred along with the original cast. But when an insensitive teacher ridiculed my writing, I quit and didnâ€™t pick it up again until my oldest was about to start college. Since then, Iâ€™ve had a great time writing what I like to read.

What are you working on now?
Iâ€™m doing revisions for the third book in the Switched series about twins who exchange placesâ€”from Earth to a starship and the reverse. I hope to have Switched, the Aftermath ready for release in April.

Complete this sentence: When I want to kick back and relax, I ___________
I watch movies. Hubs and I enjoy going to the show for first-run movies, but we have enough DVDs that we could watch movies from now to the end of the world. Oh, wait. That already passed. LOL

Margery, thank you so much for having me here today.

In this excerpt from The Pilot, itâ€™s the day after Trevarr impounded her ship. Celara finds him at a local cafe.

â€œGo ahead and eat, Administrator. Your food will get cold.â€
With suspicion, he eyed the plate of scrambled spherix eggs and side of fried plantens. â€œI am debating whether you could have slipped poison into my food as your friend brought it to the table. Or maybe some neelonga leaves in my tea while I was looking at your leg.â€
â€œYou mean when you were ogling under my skirt?â€ Then she appeared to collect herself. She laughed, a quiet, deliberately delicate laughâ€”so different from the others he had heard. The genuine ones. â€œSilly boy.â€ She flopped her wrist in a playful gesture. â€œI have come to apologize for my unseemly behavior yesterday.â€ She smiled sweetly.
â€œOf course. I should have guessed.â€ Giving her a wry look, he picked up the crockery mug of aromatic tea. Staring into the depths, he made a show of inspecting it for foreign substances. â€œAre you apologizing for attempting to inflict bruises or for insulting my heritage?â€ He snapped his fingers. â€œI have it. You are apologizing for contributing to the hearing loss in my right ear.â€
Her knuckles shone white before she dropped her hands into her lap.
â€œAdministrator Jovano.â€ Her voice contained a good mix of apology and pleading. â€œPlease forgive me. I should not have interrupted your First Meal. When I came in and saw you here, I knew I couldnâ€™t eat until I settled the matter between us. I didnâ€™t get a wink of sleep last night, so torn was I with remorse. Why, I wanted to rush to your residence last night and offer amends, but Arjay convinced me to wait until morning.â€
â€œHow? Did your AI tie you to the bed?â€
â€œOf course not.â€ She took a deep breath as if steeling herself for an unpleasant task. Eating oneâ€™s words was never pleasant. What had she asked him? Boiled, broiled or fried?
â€œYesterday, I was a trifle upset.â€ She sniffed delicately.
Trifle? In the ensuing pause, while he waited to see how deep a hole she could dig for herself, utensils clattered on crockery and voices murmured.
â€œI am certain a man as perceptive as you understands how distressing it was.â€ She pinched the bridge of her nose. When she looked up, her eyes shimmered with tears.
While she heaved a sigh, he took a bite of the spherix eggs. They were delicious, as always. Baro was a chef worthy of the finest eating establishments in the capital city. His talents were wasted out here.
Trevarr looked at dâ€™Enfaden thoughtfully. â€œThose Terransâ€”the ones whose entertainment you recordâ€”have an aphorism that is appropriate for this occasion.â€ He paused to sip his tea. â€œIf I believe your performance, you have a . . . bridge to sell?â€ At her astonished look, he blinked twice as if perplexed. â€œDid I not get the expression right?â€
She jumped up, all trace of tearsâ€”and smilesâ€”gone. He thought he heard a small popping sound that increased when she planted her palms on the table and leaned in. What he saw next completely distracted him from the soft noises. The scoop neck of the overlarge dress gaped.
Well now, Trevarr smiled. Her bright green undertunic also gaped. Heat jolted through him. A heat he hadnâ€™t experienced sinceâ€”
â€œOh, you got it right, buddy.â€ Her voice, as strident as it had been yesterday in the repair bay, attracted attention from the diners. â€œHereâ€™s another saying from Earth. â€˜Thereâ€™s no place like home.â€™ You stole mine, and I want it back.â€ She flipped the contents of his plate into his lap.
On her way past the astonished newcomers, she called through the open window to the kitchen. â€œBaro, Admin Man needs a new meal.â€
During the silence that hung in the wake of Celara dâ€™Enfadenâ€™s exit, he was more aware of the fine way her gauzy skirt displayed the twitch of her hips than he was of the blue spherix eggs and pink plantens in his lap.
Sweet Divinity, he thought with a smile. What a fem.

The Pilot is available at Amazon ~ Smashwords ~ Barnes & Noble ~ Kobo

Diane Burton can be found around the Internet at:

Thanks for joining me today, Diane. Best of luck with The Pilot.