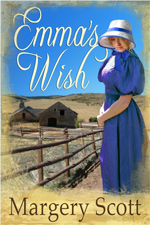 Welcome back to Sneak Peek Sunday. This week, I’m leaving Charlotte in Calico Creek and taking my six paragraphs from my first published book, Emma’s Wish, which is currently one of Amazon’s top 100 western historical romances. These are the opening six paragraphs.

“Please don’t send us away, Pa.” Six-year-old Nathan tugged on the rolled up sleeve of his father’s shirt. “We’ll be good. We promise. Don’t we, Joseph?”

Beside him, his older brother nodded vigorously, then scrubbed at his tear-stained eyes with his grimy knuckles.

Studying the two boys, Becky’s head bobbed in agreement, setting her pale blonde curls bouncing. She was too young to understand the significance of what Sam had just told them, but whatever her brothers did, Becky followed suit, as much as any three-year-old could.

Sam Jenkins raked his fingers through his hair. God, if there was any other way … But there wasn’t. It was the right thing to do. He’d done his best to look after the children and the ranch, if it could be called that – but it wasn’t good enough. He was failing at both, and now he had to muster up the courage to do what was best for them, no matter how painful it was. Seeing the children lined up in front of him, looking at him as if he was some kind of monster, just about tore his heart out.

Leaning over, he picked Becky up and settled her on his lap. Her pudgy arms reached up around his neck, and she planted a loud smacking kiss on his cheek. Swallowing painfully against the grief choking him, he took Nathan’s small hand. His gaze rested on the calluses on the little boy’s palm. Dammit, his hands shouldn’t already show signs of hard labor. Youngsters shouldn’t have to work that hard.

This was exactly why he’d made the decision, the decision the children hated him for right now. But they’d thank him later. He had to believe that.

I’d love to hear your comments, so don’t be shy. And don’t forget to check out the other sixes here.