On this special day, please help me give a warm welcome to Margaret Taylor, my guest author for today. Setting and world-building are so important, both for the author and reader, to establish a sense of place where the story unfolds. Margaret’s going to tell us little about building a world in fiction, but first, here’s a short bio.

Margaret Taylor currently lives in San Antonio, TX and is scratching post for her five cats and one puppy. She is an avid writer, a novice photographer and enjoys all things paranormal and science fiction! Just ask her, she’ll tell you!

Thanks so much for visiting today, Margaret. The blog is yours.

First off, allow me to say thanks Margery Scott for hosting me on this wonderful 4th of July, 2013.

Next, allow me to introduce myself. My name is Margaret Taylor and I write primarily Sci-Fi and Paranormal Romances. One of my first books, A First Love Never Dies, in the Spi-Corp Series was released on June 2nd and it introduces you to the â€œUniverse As I See Itâ€. Ok, that should probably read the Universe as I made it up, but you get the idea.

With that in mind, and considering it is the 4th of July here in the U.S., I thought Iâ€™d give you just a sneak peek into how I go about building a world within the universe Iâ€™ve created.

But to do that, I need to give you just a brief bit of background on the series. It started in 2007 when, while on my Christmas Vacation, I had CNN going in the background and my ear happened to catch this line during the opening of a special report they were doing.

The reporter said: Do you know how many women between the ages of 18 and 30 go missing every year in the U.S. and are never heard from again?

Well, of course I didnâ€™t, but it did catch my interest and caused the following â€œWhat Ifâ€ to pop into my brain.

Well, what if they are never heard from again because theyâ€™ve been kidnapped by Aliens and sold into the Flesh Markets of Outer Space?

AH HA! The next thing I know, its three days later and the first draft of A First Love Never Dies has been completedâ€¦

Sadly, though, this was only the beginning and it was very rough because I had nothing else to work with. Meaning that while the story itself came out wonderfully, there were a TON and I mean a T-O-N of planet sized holes in it because I didnâ€™t have the foundation of the Universe in place. Fast forward to 2013 and Iâ€™ve spent the last 6 years creating that universe â€“ in the background â€“ along with the 17 books in the series. Now, not all of them are complete, but most of them are and those that arenâ€™t are plotted and just waiting for me to get to them.

Anyhoo, I hear you asking, what does that have to do with the 4th of July? Well, I tell you. Being that this is a day primarily celebrated by the U.S. (Even though every country on the planet has some version of it), it does beg the question for a Sci-Fi writer like myself of how much work do you want in the worlds you read about? How much detail is too much or not enough?

For me, I give just enough detail in the books Iâ€™ve written to be pertinent to the story. No, I donâ€™t dumb it down per se, but I donâ€™t give you the co-efficient to the square root of the plazmonic-harmonizers that power a seven-coil plazmonic engine either. (Ok, I totally made that up, but you get the idea.)

What I do give, in most of the books as you go along, are those details that make the world come alive for the reader. At least I hope I do. I give you the pertinent holidays, if there is one at the time youâ€™re arriving on the planet. I give you a general idea of what the world is like, what the government (if there is one) is like and what the people/race are all about.

And to prove that, Iâ€™m going to give you just a brief excerpt from Book 6. This book is about Brant Olin and Tashanda Bloome and the Galactic Racing League, but at one point brings you to the Ethu System of Sector 5 and the Planet Fellar.

I hope you enjoy it!

Fellar was a lush, fertile planet. 65% of it is one giant, connected land mass, covered in thick, unforgiving jungles of massive trees and mountains. The other 35% is water tributaries that cut paths through the land. Some were only a few yards across while others span a great distance between shores.

According to their history, the planet had once been all land, with the water trapped deep beneath the crust. Over the millennia, it had bubbled up through cracks and crevices, eroding away the soil until they had easier access to it. The rivers had split across the planet in various places but it didnâ€™t hinder their evolution, if anything it aided it.

Jilaro, the first Fellarian to walk on hind legs, had seen the power of water and begun building structures next to the widest body he could find, the River Marandhu. The village he started had grown over the centuries into their capital city of Solla. It now spanned the River, with massive bridges between the two halves for several miles in either direction. On the right side of the river were the docking ports for the various ships and visiting dignitaries from the outer cities. On the left was the city proper.

But, despite their evolution from predatory animal at the top of the food chain, to space faring Warriors, they hadnâ€™t decimated their jungle home. Oh, theyâ€™d tried, many times over the centuries, to clear cut the area but the trees, vines and other flora had always returned, sometimes with a vengeance. Eventually a balance had been struck and now the Capital City was a combination of modern technologies interwoven with the massive trees and undergrowth of their jungle world.
He smiled and took in a huge lungful of clean, fresh air. It had been far too long since heâ€™d been home, far too long.
â€œBrant!â€

He turned in the direction of the speaker and smiled at his cousin, 1st Doctor Ena.

She pulled back and looked up into his eyes. â€œIt is good to lay these eyes upon you.â€

He smiled softly. â€œAnd you. How is your paternal?â€

She laughed. â€œSame as always. He refuses to pass the old cat, rolls around the Med growling orders, just like before. And you? How are your parentals?â€

He put an arm around her shoulders, squeezing. â€œThey are well. What brings you here? To the ports?â€

She elbowed him in the side, smiling. â€œI saw your request to the Med. Thought it was best to be greeted by family. Who is the patient?â€

Tears pricked at his eyes. â€œMy, Vaska,â€ he admitted softly.

She drew back, jaw falling open. â€œWhat? The great bachelor has been vined by his Vaska?â€

â€œSomething like that.â€ He turned them back toward Bella. â€œCome, I will explain as we travel to the Med.â€

Thank you so much for taking the time to visit with me and catch a glimpse of My World. I hope youâ€™ve enjoyed it and will pick up a copy of A First Love Never Diestoday! Book 2, Saving His Love will be out July 8th! 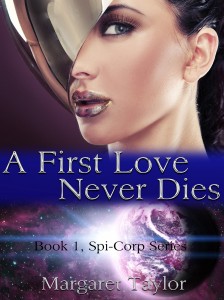 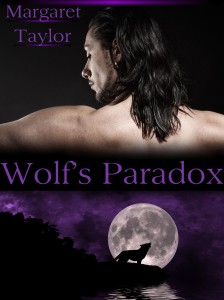 Her second release, Wolf’s Pardox (book 1 of the Layren series) will be available on July 8.

You can learn more about Margaret and her books by visiting her blog and following her on Facebook and Twitter www.facebook.com/AuthorMargaretTaylor.

She also has many other current projects in the works. If you visit her blog and ask nicely, she might be persuaded to post some tasty excerpts! *Bring Cookies as payment please!*

Margaret, thanks so much for visiting. Have a happy 4th of July.