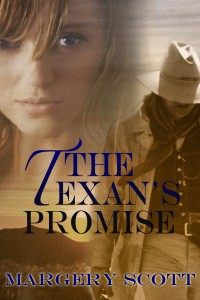 I’m excited to announce the release of The Texan’s Promise, a short story (about 4,000 words) now available on Amazon.

Mary Willow believed Garrett Connors when he left Texas, promising to come back for her. Now, four years later, he’s home, and it seems he doesn’t even recognize her. Was his promise a lie? Did she mean nothing to him? Or is there another reason why it took him so long to return?

The Texan’s Promise also introduces Calico Creek, Texas, one of many small towns that grew out of the wilderness in the latter part of the 19th century and the setting for a series of historical western romances I’m in the midst of plotting right now.

I hope you like this story and that you’ll want to come along with me and meet the other men and women who live and love in Calico Creek.