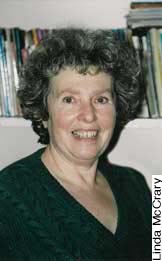 My guest today is Meg Bellamy, author of the TV Love series of romances.

Along with her husband, her family and her books, language is Meg’s passion. In fact, by day she’s a mild-mannered language teacher. Currently she teaches ESL (English as a Second Language) to international students, but in her early teaching days, her main subject was French. Though her French is a bit rusty these days, she figures a trip to France would help fix that. She’s also studied Russian, Spanish and Italian. This love of language spills over into her writing craft and appreciation for books — and travel!

Meg gets to satisfy the travel bug with trips to England — as often as possible — to visit family. It’s great when Lee, her DH, also goes because driving on the left side of the road doesn’t intimidate him — talk about your basic hero type! Meg also has to travel to see other family members in New Jersey — a mere continent away from Meg’s home in Northern California.

Being a published member of the community of writers with her contemporary romances and women’s fiction is the fulfillment of one of Meg’s most cherished dreams. Her first release, Homecoming, was released October 19 — a week before her birthday — from The Wild Rose Press.

Thanks for taking the time to visit with me today, Meg. Your series, TV Love, intrigues me since I’m a huge TV watcher. So, in show biz terms, the stage is yours. Take it away.


Reality TV? Bring It On
by Meg Bellamy

Thank you so much, Margery, for inviting me to your blog today.

Is reality TV one of your guilty pleasures? It is one of mine. Since my husband and I don’t have cable, we miss out on the wide selection of fun shows available to those who do. When I visit my beautiful daughter who does have cable, we have some marathon viewing sessions. I love the food shows — the cupcake wars and more — and the shopping networks. I have to restrain myself from buying everything.

I also love to watch brides saying no to a lot of dresses before they finally say yes. How about the show where four brides go to four weddings and rate each one? And the one where people buy houses in the U.S. and abroad. Maybe it’s a good thing for my writing career and my home and hearth that I don’t have cable.
Luckily, there’s some reality TV on the regular networks. When it’s in season, I tend to plan my life around Dancing with the Stars. I love to watch and fantasize that I’m a ballroom champion, doing a romantic tango with a totally hot guy. Once I actually met Gilles Marini, one of my favorite stars, outside the nearby Costco. Talk about the ultimate shopping experience! He autographed the back of my receipt, which is still hanging in a frame on my fridge door.

When I fantasize about a being an entrepreneur with a million-dollar idea, I tune in to Shark Tank. I love seeing the ideas people come up with — and the competition among the sharks is a hoot.

When I watch, I often think of other scenarios for the people who invite us into their lives by being on these show. This idea sparked my TV Love series. Inspired by Shark Tank, I wrote TV Tycoons: TV Love, Book #0.5. This is the prequel to TV Bride: TV Love, Book #1 — my homage to one of the oldest reality TV shows, The Bachelor.

I’m excited that The Bachelor has just begun a new season. Like many other viewers, I love romance, brides and grooms, and weddings. I enjoyed seeing Sean Lowe, the current Bachelor, on The Chew, a foodie show. When I wrote TV Bride, I took my bachelor in a whole different direction. I wondered, What would happen if the Bachelor met the Godfather? TV Bride answers that question. I’ve included a blurb and excerpt, which I hope you’ll enjoy as much as I enjoy reality TV.

Coming soon at other sites; please check my website for updates: http://www.MegBellamy.com 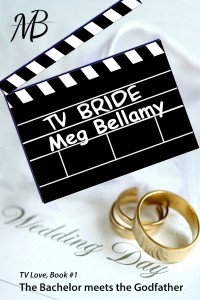 Blurb:
————————————————————————
Samantha Parker, a photographer with trust issues, and Nick Ryan, a cynical writer, meet when they compete to rent the same cottage. Though Nick wins the cottage, it comes complete with a curse from Samantha.

The next time they meet, he’s the reluctant bachelor on a nationally televised wedding reality show. She’s an even more reluctant potential bride. Who could have predicted that these two would fall in love? Too bad Nick is forced to propose to Melinda, another “bride” — or his brother will have to duke it out with some very tough guys. The gang behind Melinda has laid a very careful secret trap, leaving Nick with an impossible choice-a future with the woman he loves or a future for his brother.

Can Samantha’s love for Nick survive after he dumps her on national TV? Stay tuned to find outÅ

Late May in Sausalito. Samantha Parker took a deep breath and smiled at the universe. Life didn’t get much better. Today she was moving into the perfect cottage for a rent she could almost afford. All she had to do was sign on the dotted line, transport the stuff she’d loaded into a U-Haul back home in Stockton and accept delivery of her new bed. Practically bouncing on air, she flew into the property manager’s office one minute early to sign the lease and get the keys from the owner, kindly Mrs. Harrigan.

Samantha’s descent from the clouds didn’t begin until she saw Mrs. Harrigan weeping into a lace-trimmed hanky. Mr. Owens, the property manager, twirled his mustache while a GQ model type, a stranger to Samantha, signed a lot of papers. When Mrs. Harrigan spotted Samantha, she wept harder and honked into her hanky.
“Miss Parker,” she said between sobs, “why are you here? Didn’t my son Edgar call you?”
Samantha frowned. “No one called me. I’m here to sign the lease for the cottage. You know,” she elaborated carefully in case anyone had forgotten, “for the perfect cottage where I can live and set up my photographic studio? The one you’re so happy to rent me because you wanted to be a photographer before you married Mr. Harrigan?”
Mrs. Harrigan appeared far too overcome to respond. Mr. Owens cleared his throat. “Mr. Ryan here is renting the property. We thought you’d been informed not to come.”
Samantha sat down hard in the faux leather chair opposite the desk where Mr. Ryan had evidently just signed his name to the last of the papers. She toyed with the idea of snatching the papers and ripping them to shreds. Instead, she sighed deeply. “I’ve just loaded all my belongings into a U-Haul and driven here. I’m supposed to sign the lease and get the keys so I can move into the cottage. Today. My new bed will be delivered there in less than two hours.” She turned to Mrs. Harrigan, who kept her face averted.
Mr. Owens cleared his throat again. “Mr. Ryan has already signed the lease.” He handed the younger man a set of keys and bared his teeth at Samantha. “The cottage is his.”
She barely resisted stamping her foot. “That can’t be. I’m the one who’s supposed to lease the cottage. Everything is set.”

Mr. Owens shrugged. “You didn’t have anything in writing. These things happen. I do have other rental properties to show you.” He thought for a moment. “Well, one or two in your price range. Not in Sausalito.”

Samantha, ready to throw herself on Mrs. Harrigan’s mercy, bypassed Mr. Owens and directed her words to the older woman. “This can’t be right. We had a deal, Mrs. Harrigan. I agreed to pay the rent you advertised. I don’t smoke and I don’t have pets. I promised to take photos of your grandchildren. I trusted you.” Her voice rose in an unintended squeak.
Mrs. Harrigan wrung her hands. “I wanted you,” she moaned, “but my son Edgar overruled me. Mr. Ryan outbid you on the rent. As I’m going to be living with EdgarÅ ”

Samantha glared at Mr. Ryan. He rose and held out his hand, which she refused to shake. “Nick Ryan.” When she continued glaring at him, he shrugged and sat down. “Hey, all’s fair in love, war and the Bay Area housing market.”
“I’m so sorry,” Mrs. Harrigan sobbed.
“You do understand, Miss Parker.” Mr. Owen looked on the verge of calling security. He chuckled dryly. “These things happen all the time.”
Samantha switched her glare to him. Rising to her full height, five-eight in her bare feet, she willed herself to look commanding. “Two things I understand,” she intoned, looking at the weeping woman. “One. It’s not your fault, Mrs. Harrigan. I know you’d never be swayed by demon money.” Then she turned to the usurper, ignoring his eye candy appeal to focus on his evil act. “Two. Nick Ryan, you’ve gotten your new home by unfair and unscrupulous means. By offering to pay more than the asked for rent, you struck a low blow against tenants who follow the rules.”
He rolled his eyes. “Lady, I need a place to live. I found one, not easy in the Bay Area. I did what I had to do. This is nothing personal against you.”
“I’m so tired of people doing crummy things and then excusing themselves by saying ‘It’s the lousy housing market, nothing personal’. Until you came along, the cottage was mine.” She tried in vain to gather her scattered thoughts so she could end on the perfect word. Instead, she said the first thing that popped into her head. “According to ancient tradition, because of your subterfuge, there will be a curse on you as long as you occupy the cottage. Nothing in your life will go right ’til you restore the balance of justice, and the rightful renter lives there.”

On that note, she spun around and majestically swept from the office. Walking tall with great pride, she held her mighty pose –until she got to her U-Haul and collapsed in a heap. With the last dregs of her strength, she pulled out her cell phone, called her best friend Tiffany Swanson and said, “Help!”

Thanks so much for visiting, Meg. I’m sure your books will be a huge success.