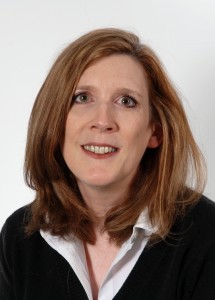 Please help me welcome author Kathryn Barrett to my blog today to tell us about her novel, Temptation, and also about losing her voice.

Bio:
Kathryn Barrett reluctantly put aside childhood dreams of becoming an author and took a more practical approach, majoring in Business Administration in college. But after marrying an Air Force officer, she realized a career in high finance didnâ€™t suit an itinerant lifestyle. She happily returned to her first love, writing stories that feature larger-than-life characters, family relationships, and of course, a happy ending.

Having lived all over the United States, Kathryn and her family now live in England, just outside London. She enjoys walking her dog in the Chiltern hills and exploring crumbling castles, and only occasionally reads the Financial Times.

I still remember the day I arrived in the UK. I thought I was prepared for an overseas move, but suddenly there I was, in a foreign country, where no one spoke English. American English, I mean.

I sort of figured everyone would sound like Tony Blair, a rinsed version of a BBC anchor. (I also thought that whole driving on the left side was just for show, but I soon realized that not only did they really drive like that, but the cars all had steering wheels on the right side too. They werenâ€™t joking around!)

By the time I got to our flat in London, I feared I was in real danger of losing my voice. Not physically, but my mental â€œvoiceâ€, the sound inside my head that I use for writing. The voices of my charactersâ€”both their internal and external dialogue.

I realized I would be surrounded by British voices, on the radio, on the television, in the shops, at the classes I tookâ€”everywhere except in my home, where my American family still speaks with an increasingly foreign-sounding American accent. What if this new way of talking crept into my US-set novels?

I was afraid Iâ€™d never write again. Or Iâ€™d be limited to writing only about ex-pats like myself, who balk at saying the word â€œpantsâ€ and use strange subject-verb agreements like â€œthe government areâ€. The lingo of the Midwest, the Valley Girl cadence, the Southern drawl Iâ€™d been born withâ€”would these dialects disappear from my memory?

Thankfully, that hasnâ€™t happened, not completely.

After years of living amongst a British-speaking population, Iâ€™m as bilingual as a child raised by parents of different nationalities. My language adapts to the occasion.

Today I told a lady at the carpark (not the American â€œparking lotâ€) that â€œI was meant to move to Americaâ€. If Iâ€™d been speaking to my husband, Iâ€™d have said â€œI was supposed to move to the US.â€ See the difference? It slips out without my thinking it, depending on the audience. Another time, in the same carpark, I remotely raised my trunk and when it was about to hit an unsuspecting passerby, I blurted, â€œWatch outâ€”the boot!â€ knowing she would have been unlikely to know what I meant if I used the American â€œtrunkâ€.

I did notice that when editing my novel Temptation, about an Amish furniture maker and a Hollywood actress, I couldnâ€™t bear to have my characters wearing â€œpantsâ€. But the word â€œtrousersâ€ fit better when describing an Amish manâ€™s attire anyway. And I found I liked dressing my Barbieâ€¦err, my heroineâ€”in vintage dresses, skin tight jeans, and other, more specific outfits than â€œpantsâ€.

Which makes for better writing, doesnâ€™t it?

My vocabulary is enriched now, since Iâ€™ve been exposed to daily onslaughts of British English. I am often gobsmacked, occasionally chuffed, and collect bits and bobs. (Iâ€™m still not quite sure what a â€œbobâ€ is but I collect â€™em anyway.) I can be either pissed (meaning angry in the US, or drunk in the UK) or I can be cross, which sounds so twee (but is actually meant to be angry).

I can make my subjects and verbs agree with any old thing. I can discuss football on two continents and still not know a single rule of the game. I know where to go to buy knickers, and want to be sure to wear clean ones if I go to hospital, especially the ER, or rather, A&E.

I love having two words to call most things (and doesnâ€™t â€œrubbishâ€ sound better than â€œgarbageâ€?). I love hearing the many different accents of the British Isles. But I still retain my essential American-ness, thanks to family and friends who keep me grounded in my home countryâ€™s speech patterns.

Although, I will insist on saying â€œwaterâ€ instead of â€œwadderâ€. Not because I want to sound posh; I just want to be served proper H2O.

Hereâ€™s a bit (or is it a bob?) of my novel Temptation, a heated scene between my Amish furniture maker hero and the Hollywood heroine, Laura, where Pennsylvania Dutch meets SoCal Gal:

She looked up from the tabletop she was inspecting, her smile like an electric light. â€œHi. I didnâ€™t want to disturb you.â€

Didnâ€™t she know she was disturbing him just by existing? By walking into his shop and interrupting his mortise and tenon construction?

She hopped up on the table beside him. â€œI have an emergency.â€

â€œYou should try the hospital. Thereâ€™s a good one in Lancaster.â€

She laughed. â€œItâ€™s a decorating emergency. I need furniture, and I need it fast. My motherâ€™s coming on Friday, and if she sees an empty stretch of baseboard sheâ€™ll call her decorator.â€ She lowered her voice. â€œTrust me, it wouldnâ€™t be a pretty sight. Roger isnâ€™t known for subtlety.â€

Jacob hung his measuring tape on the pegboard, in the wrong place, but he was grateful for any excuse to move away from her.

â€œCan you just see French Provincial, down-stuffed Louis Quatorze chairs in my cute little farmhouse?â€ Laura shuddered. â€œHonestly, I need help. And youâ€™re the only one who can help me.â€

Jacob shook his head. â€œI cannot help you this time. I have a shipment of chairs due in Lancaster this week.â€

â€œSurely youâ€™ve got something here?â€ She looked around the workshop. â€œAnything. I donâ€™t care if itâ€™s half finished. Iâ€™ll take it unstained, unglued, whatever. Anything to keep my mother from terrorizing me with Louis Quatorze.â€

â€œI can make you a guillotine. It worked pretty well in France.â€

â€œIt would work for that, too.â€

She laughed, then gave a melodramatic sigh. â€œYou donâ€™t know what sheâ€™s likeâ€¦she comes in and takes over. Sheâ€™s like Mommy Dearest without the personality. She always knows how best to run my life, how to decorate my house, how to pick my boyfriendsâ€¦donâ€™t laugh! She tried to set me up with her podiatrist once.â€

He nodded, as if he understood perfectly. â€œMothers are supposed to do that. Itâ€™s in their nature.â€

â€œShe sounds like mine. Maybe we should introduce them.â€

â€œHmmmâ€¦ Iâ€™m sure your mother would tell her where to put her overstuffed chairs.â€

He looked away, hardening his heart to her pleas. She didnâ€™t need his chairs, or his heart. â€œI cannot help you.â€

She slid closer, until there was no further room for him to move away. â€œIâ€™ll pay you. Whatever you wantâ€”â€

He glared at her, his feelings for once close to the surface. She wanted something he couldnâ€™t give herâ€”wouldnâ€™t give her. Jacob was only flesh and blood, and his control snapped, snagged by a trace of perfume in the air surrounding her. â€œI do not want your money!â€

She swallowed. â€œWhat is it? Did I do something? Say something?â€

â€œWhat?â€ she repeated, a demanding child whoâ€™d too rarely been denied. â€œYouâ€™re angry with me.â€

He kept his gaze lowered, not answering. Of course he was angry, but not with her.

â€œIâ€™m the one who started it, remember?â€ She waited a beat. â€œBut I didnâ€™t see you protesting then.â€

About Temptation:
Laura Hayes has been acting since she was in diapers, and acting up almost as long. When she moves to Pennsylvaniaâ€™s Amish country to film her next movie, she discovers thereâ€™s more to life than a pair of Jimmy Choos and a Marie Claire cover.
Intrigued by the Amish simplicity, sheâ€™s soon putting in a garden, dodging earthworms and garter snakes. And when her neighbor turns out to be the local heartthrob as well as a talented furniture maker, she realizes that whatâ€™s missing from her life might be the love of a good manâ€”not to mention the perfect heirloom tomato.

Jacob is trying hard not to question the teachings of his Amish faith, despite a desire to create furniture that looks like it belongs in a museum rather than the local tourist shop. As his attraction for his neighbor grows, so do his doubts, until heâ€™s forced to face Temptation.