I’m thrilled to welcome author Anna Markland back to my blog (you can see her previous post here). Not only is she a fellow Canadian, she’s one of the fourteen members of Love Historicals, a group of authors I’m honored to be part of.

Thanks for visiting again, Anna. The blog is yours. Take it away.

Thanks for having me as a guest, Margery. Great to visit with a fellow Canadian.

Iâ€™d like to talk a bit about the medieval practice of exchanging good faith hostages. It was common for allies to exchange hostages as a guarantee of support. Children were often chosen for this role, especially those of royal houses. They were deemed to be valuable assets that a king would not jeopardise.

There is a well documented incident which illustrates how such an exchange can go horribly wrong.

In February 1119, Eustace and Juliana of Breteuil, formerly allies of Henry, threatened to rebel unless they were given the castle of Ivry-la-Bataille. Juliana was one of King Henryâ€™s many illegitimate children.

Henry promised Eustace the fortress and, to show good intent, exchanged hostages, Eustace and Juliana’s daughters being exchanged with the son of the castle’s constable.

According to the chronicler Orderic Vitalis, Eustace then blinded the constable’s son, whereupon Henry allowed his illegitimate granddaughters to be blinded and mutilated.

Eustace attempted to mobilize his forces and defend Breteuil against an attack by Henry; despite this, Henry took the city and Juliana fled, after unsuccessfully attempting to kill her father Henry with a crossbow.

This tale also illustrates how brutal life could be in those days. 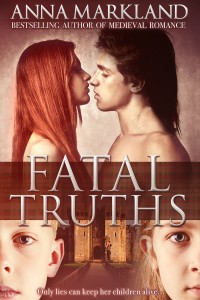 My latest release, Fatal Truths, is based on a hostage exchange. It is the long awaited story of Alexandre de Montbryce, grandson of the hero of my first book, Conquering Passion.

Alex is a rich and powerful Norman nobleman, haunted by a troubled past. He has sworn never to marry.

Elayne arrives from Scotland, masquerading as nursemaid to her own children, handed over by King David as good faith hostages. Neither she nor her children are who they purport to be and only lies can keep them alive.

ELAYNE DUNKELD FUMED INWARDLY, but held her tongue as she and the children were ushered into the opulent chamber assigned to them, surprised not to hear a key turn in the lock when they were left alone.

Tears threatened as she sat Claricia on the bed, tossing her playd onto a chair. The warmth of the familiar woolen garment had strengthened her during the interview with the Comte. It was a link with her homeland. She combed her fingers through her hair, stifling the urge to scream out loud.

â€œWhatâ€™s wrong, maman?â€ Henry asked, clamping his arms around her thighs, his head on her belly.

Elayne blinked away her tears. She had to be strong for her childrenâ€™s sake. She stroked her sonâ€™s blonde hair, thankful for once that he and Claricia had inherited their fatherâ€™s coloring, then lifted him to sit on the high bed. Sitting between her twins, she hugged them to her, finding solace in their warmth. â€œYou cannot call me that, Henry, mo mhac. Both of you must remember. Itâ€™s a game. If all is to go well here, no one must know I am your maman. Always call me Elayne.â€

No use reprimanding them. They were babes, and bone tired. It had broken her heart to see them in chains. Was she expecting too much? But much had been expected of her. â€œYour grandpapa DabÃ­d explained to you why we have been sent here.â€

Henry nodded as she pulled off his boots. â€œWeâ€™re stages.â€

Henry shrugged away from his mother when she tried to help him with his doublet. â€œI can do it. Grandpapa said we have to be indâ€”indepâ€”â€

â€œIndependent,â€ Elayne supplied. â€œGood. Iâ€™ll help Claricia while you prepare for bed. Perhaps the servants have put your nightshirt in the armoire.â€

Henry wandered over to the armoire, naked in the warm chamber. Elayne smiled wistfully, thinking of the future when her son would be a manâ€”no longer comfortable strutting bare-arsed in front of his mother and sister. She prayed they would all live long enough to see that day.

â€œI â€˜member,â€ Claricia said, content to let her mother undress her. â€œGrandpapa was angry â€˜cos Queen Maud â€˜manded stages even though he promised to help her.â€

Henry came back to the bed tugging his nightshirt over his head. â€œSo weâ€™re playing this trick to help Grandpapa.â€

Out of the mouths of babes. It was a cruel irony that her father-by-marriage, the great King DabÃ­d mac Choluim had been only too anxious to consign his bastardâ€™s children to Normandie.

Pick up your copy now on Amazon.

Thanks for joining me today, Anna. Best of luck with Fatal Truths. Sounds like a great book. I can’t wait to read it.